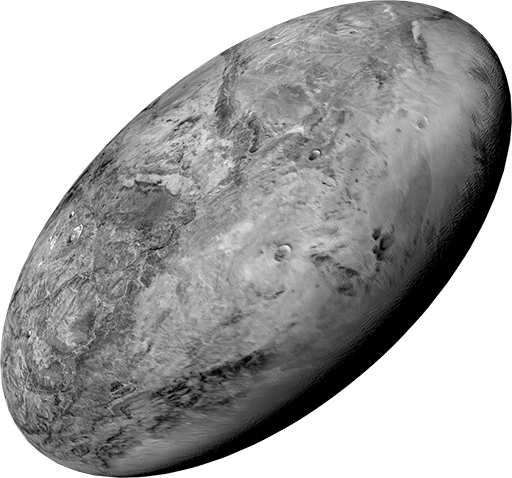 Discovered in December 2004, Haumea is the third closest dwarf planet from the Sun and the fastest spinning known large object in the Solar System.

Haumeaâ€™s extreme elongation is probably caused by its rotation - so rapid, it turned Haumea into an ellipsoid and made it the least spherical of the dwarf planets.

In the early Solar System, Haumea may have been much like Pluto, composed half of rock and half of water. Billions of years ago, a large object is theorized to collided with the body, knocking most of the surface ice away and imparting a rapid spin to the dwarf planet.

Haumea has two moons: The larger, Hi'iaka, is only about 1% as massive as Haumea, while the smaller, Namaka, weighs only about a tenth as much. Both moons are thought to be composed of almost pure water-ice, which may have originally come from Haumea itself.