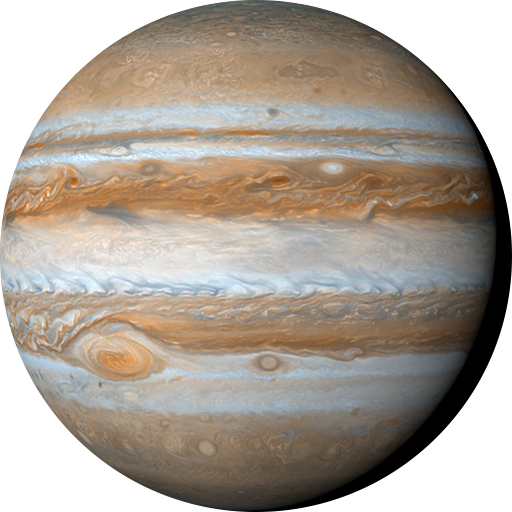 Jupiter is the largest planet of the Solar System, with aÂ mass 2.5 greater than all of the rest of the planets combined - but still only one-thousandth that of the Sun.

Jupiter spins on its axis faster than any other planet. Because of this rotation, Jupiterâ€™s atmosphere is subject to high winds, which cause the atmosphere to form distinct bands of colour, like swirling vortices and gigantic anticyclonic storms.

Jupiter governs the largest number of moons of any planet, with the current official total being 67. The four largest are the Galilean moons: Io, Europa, Ganymede, and Callisto. Ganymede, the largest moon in the Solar System, has a diameter greater than that of the planet Mercury.

Jupiter is the fourth brightest object in our skies after the Sun, Moon and Venus. Because the orbit of Jupiter is outside the Earthâ€™s, the planet always appears nearly fully illuminated when viewed through Earth-based telescopes. 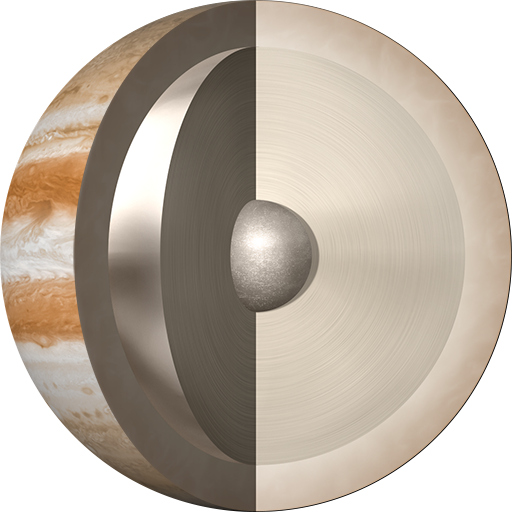 Jupiter is composed primarily of gaseous and liquidÂ matter. There is no surface, only a gradual change from the atmosphere. Conditions blend smoothly from gas to liquid as the temperature and pressure inside Jupiter increase steadily toward the core.

Jupiter is thought of have aÂ dense core. The exact composition of the core is unknown, as are the properties of materials at the temperatures and pressures of those depths, but it is thought to be solid.