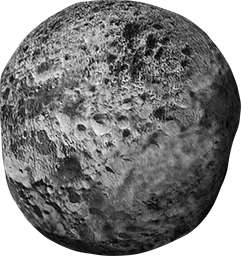 Proteus is the second largest Neptunian moon, and Neptune's largest inner satellite. Despite its size, Proteus is irregular in shape. Its extremely dark surface reflects only 6% of the sunlight that strikes it.

Proteus is probably not an original body that formed with Neptune: it may have accreted later from the debris created when the largest Neptunian satellite Triton was captured.