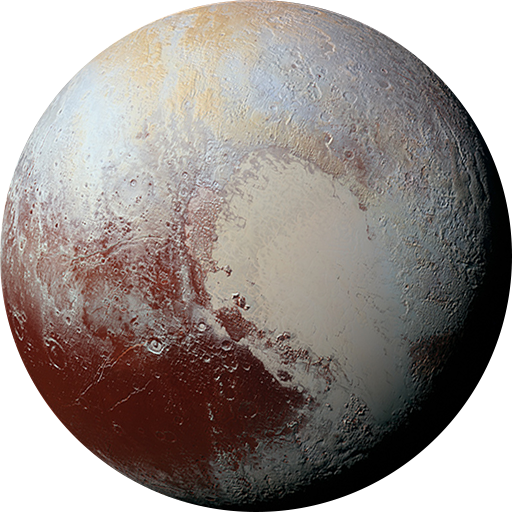 Pluto is the largest object in the Kuiper belt and the second-largest known dwarf planet in the Solar System.

Pluto has five known moons: Charon, Nix, Hydra, Kerberos, and Styx. Pluto and Charon are sometimes described as a binary system because the barycenter of their orbits does not lie within either body.

Discovered in 1930 by astronomer Clyde Tombaugh, Pluto was originally classified as the 9th planet from the Sun. However, the discovery of similar-sized objects within the Kuiper Belt, prompted the International Astronomical Union to re-classify Pluto in 2006 aÂ dwarf planet.

Pluto's surface is remarkably varied, with large changes in both brightness and colour: The colour varies between charcoal black, dark orange and white.

The surface of Pluto is thought to be composed of more than 98% nitrogen ice. As Pluto approaches the Sun, it is believed that these ices sublimate to form aÂ thin atmosphere.

It is possible that the heat caused by radioactive decay of minerals may have created a subsurface ocean of liquid water.