Spacepedia
Spacepedia🠊Planets, Moons and Dwarfs
Space missions to the second largest planet in our Solar System
Image Credit: Cassini spacecraft, NASA
Saturn's peaceful beauty invites the Cassini spacecraft for a closer look in this natural color view, taken during the spacecraft's approach to the planet. Acquired on Dec 17, 2004, at a distance of 28 million Km from Saturn. Read more on NASA Photo Journal
11923 views

Since ancient times the planet Saturn was among seven celestial bodies, along with Mercury, Venus, Mars, Jupiter, the Moon and the Sun, that were visible in the night sky. Saturn is the second largest planet in our Solar System and because of its rings, it is considered to be one of the most beautiful objects in the Universe. Until the Voyager 1 space mission in the late 70s of the last century, Saturn was the only known planet that could boast a series of rings. The planet Saturn is ranked among the four giant planets, similar to Jupiter (its weight is only one third). It is a largely gaseous body, composed primarily of hydrogen with the lowest density in the Solar System. An obvious Saturnâ€™s flattening at the poles is caused by rapid rotation. The inclination of the axis of rotation relative to the orbit is of great importance in terms of visibility of Saturnâ€™s rings.

Galileo GalileiÂ was the first

Saturn was the most distant of the five planets known to the ancients. An italian astronomerÂ Galileo Galilei was the first to gaze at Saturn through aÂ telescope in 1610.Â To his surprise, he saw a pair of objects one on either side of the planet. He sketched them as separate spheres and wrote that Saturn appeared to be triple-bodied. In 1659, Dutch astronomer Christiaan Huygens, using a more powerful telescope than Galileoâ€™s, proposedÂ that Saturn was surrounded by aÂ thin, flat ring.

A composite of 21 photos of Saturn and its beautiful rings, captured by NASA's Cassini spacecraft on Oct. 28, 2016. Credit: Ian Regan/Space Science Institute/JPL-Caltech/NASA

Italian-born astronomer Jean-DominiqueÂ Cassini discovered aÂ "division" between what are now called theÂ A and BÂ rings in 1675. It is now known thatÂ the gravitational influence of Saturnâ€™s moon Mimas is responsible for the Cassini Division, which is 4,800 kilometers wide.Â Giant planetÂ Saturn is composed mostly of hydrogen and helium. Winds in its atmosphere reach speed almost 500Â m/sÂ in the equatorial area. Superfast windsÂ in combination with planetâ€™s interior heat might cause the gold and yellow bands in theÂ Saturnâ€™s atmosphere. 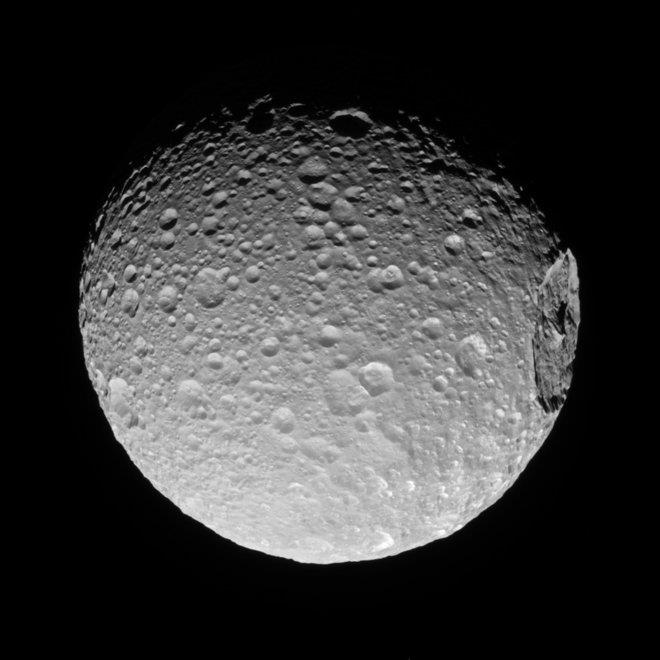 This giant planet has the most extensive and complex ring system of all planets in ourÂ Solar System,Â which are spread up to hundreds of thousands of km from the planet. The first space probe to visit Saturn was Pioneer 11, in September 1979. The research space mission was traveling under the ring system and has sent back to our planet many useful pictures of the planetary rings. However, the images showed little new information about Saturnâ€™s clouds and atmosphere. NASAâ€™s two Voyager 1 and 2 spacecraft mission flew by and photographed Saturn in the early 1980s. They revealed that Saturnâ€™s rings are made mostly out of water ice. The Voyager space probes provided many pictures and data about Saturn. They found three new moons around the planet, four additional faint rings and provided pictures of atmospheric circulation. Before the Voyager space missions, information about Saturnâ€™s atmosphere was limited because astronomers could see only the tops of the clouds from Earth. 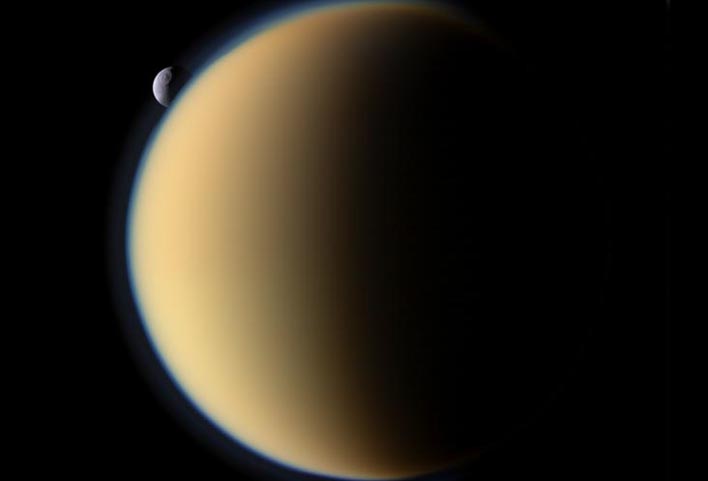 Planet Saturn has 53 known natural satellites or moons, andÂ there are probably many more waiting to be discovered.Â Saturnâ€™s largest satellite, Titan, is the second-largest moon in the Solar System, a bit bigger than the planet Mercury. Planet Saturn, its planetary rings and many of the satellites lie totally within Saturnâ€™s enormousÂ magnetosphere. It is an area whereÂ the behavior of electrically charged particles is influenced more by Saturnâ€™s magnetic field thanÂ by the energy of solar wind.Â The Hubble Space Telescope, while orbiting Earth, captured the first images of aurora in Saturnâ€™s atmosphere in 1994. It has also captured images of topographical features on Saturnâ€™s largest moon, the Titan. Hubble Space Telescope images show that Saturnâ€™s polar regions have aurorae similar to Earthâ€™s. Aurorae occur when charged particles spiral into a planetâ€™s atmosphere along magnetic field lines. 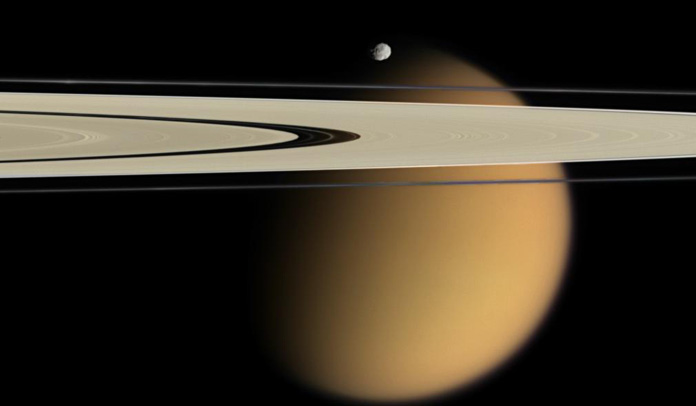 The latest chapter of getting to know Saturn took place between 2004 and 2017, as the Cassini spacecraft continued its exploration of the Saturn planetary system.Â The Cassini missionÂ to Saturn (named after astronomer Giovanni Cassini) was one of the most ambitious ever attempted. It was the joint ventureÂ ofÂ NASA, the European Space AgencyÂ (ESA)Â and the Italian Space AgencyÂ and it was designed to explore the whole Saturnian system, the planet itself, its atmosphere, planetary rings, magnetosphere and some of its moons. The orbiter, the largest interplanetary spacecraft ever constructed by NASA, has been launchedÂ from Cape Canaveral Air Force Station in Florida in October 1997,Â with the European Space Agencyâ€™s Huygens probe aboard. Seven year cruise to Saturn on a gravity-assist trajectory: twoÂ swingbysÂ of Venus, one of Earth and one of Jupiter to give the spacecraft the boost needed to reach Saturn. The Cassini space probe reached Saturn in 2004 and went into orbit around the planet. Cassini plunged between Saturnâ€™s two outer rings before it slowed down enough to be captured by Saturnâ€™s gravity and begin its four-year orbit of the planet.

Instruments on board space probe Cassini have also taken some pictures of the planet Saturn largest moon. It has been found that Titan is surrounded by a thick atmosphere with areas of water iceÂ on its surface. The Huygens probe descended through Titanâ€™sÂ atmosphere in January 2005, collecting dataÂ on the moonâ€™sÂ surface andÂ atmosphere.Â Space probe landed via parachute on Titanâ€™s surface in the mud like wet clay covered by a thin crust. The ground temperature was a chilling -180Â°C. Huygensâ€™s was the first successful attempt by humans tryingÂ to land a probe on a space body in the outer Solar System.

It drew closer to Saturn than ever in late 2016, showing an up-close view of the planet for the first time. The Cassini space probeÂ discoveredÂ eight new moons of Saturn from 2004 to 2009. TheÂ primary mission of Cassini space probe ended in 2008.Â The probeâ€™s mission was extended to September 2010 and then extended again to 2017, to study a full period of Saturnâ€™s seasons. At the end of its final orbit around the planet, as Cassini fell into Saturnâ€™s atmosphere, it completes its 20-year space mission. By this intentional fall, it has been ensured that the biologically interesting moons - the Enceladus and the Titan, would not be contaminated by microbes that might have survived the journey from Earth.